Diagramming in Confluence – Mass Import from Gliffy to draw.io

draw.io is the most powerful diagramming add-on for Confluence. It allows you to create and collaboratively develop graphs and diagrams of any kind, directly within Confluence pages: flow charts, network diagrams, organization charts, UML diagrams, mind maps and more. A second, mature add-on with similar features is Gliffy.

For customers who wish to upgrade from Gliffy to draw.io, or who want to run both add-ons temporarily or permanently,draw.io comes with a practical feature: Gliffy mass import. All diagrams created with Gliffy in JSON format can be quickly and easily imported into draw.io, and edited as if they were native draw.io diagrams.

How to mass import diagrams from Gliffy to draw.io

1. Install the draw.io app in your Confluence instance

In the General configuration under “DRAW.IO ADD-ON” select “Add-on Configuration” 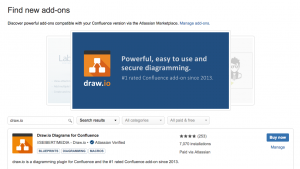 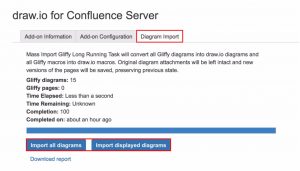 The time needed for this import depends on the number and the complexity of your existing Gliffy diagrams. It should normally take a few minutes. With just a click, this imports all of your Gliffy diagrams within a Confluence instance can be imported into draw.io. → Gliffy Mass Import Guide

The Gliffy diagrams are not lost after they are imported. They are still attached to their Confluence pages as .png and .gliffy files, and you can continue to view and edit the Gliffy diagram files as long as you have a valid Gliffy license.

Wait until the import has finished, and download the report. Use the report to see whether all diagrams were converted successfully, and which diagrams were not able to be imported.

What if there are errors reported in the mass import report?

Sometimes, problems may occur during the import process and there may be errors in imported diagrams because the Gliffy diagram formatted is not publicly documented. If errors occur during your mass import, please create a support issue by sending an email to support@draw.io and report your problem. So that we can find a resolution as quickly as possible, please include the following information in your email:

If you have any other questions, check the Gliffy mass import FAQ – your question may have already been answered.

For more tips to ensure your Gliffy import goes smoothly, check our detailed mass import guide, which includes instructions for creating a support ZIP file in case of problems.

About the Author: Antonia Prahm